If you ever get the opportunity to visit Bali… take it! I guarantee you’ll question why you didn’t go sooner.

I visited Bali last May and am planning to visit again soon. It sounds super cringe, but it was honestly the holiday of a lifetime. I stayed in Pan Pacific Nirwana, which was incredible! It has unfortunately now closed to make way for a Trump Golf Resort of all things! B******

I stayed in Seminyak, which is a quiet, peaceful part of Bali, if you’re looking for a slightly more livelier area then I would recommend Kuta or Legian. I had a couple of excursions that I booked through Expedia to break up the two weeks that I was there including visiting some of the sacred temples, monkey forests, scuba diving and where I had my first surf lesson, not a bad place to start, eh? But my favourite by far was the sunrise trek up Mount Batur.

Mount Batur is an active volcano located in Batur village, Kintamani District, Bali, Indonesia. According to Hindu belief, it is considered a sacred mountain, standing at 1717 m above sea level.

I was picked up around 1am from the hotel, it took us around an hour and a half to reach the village – the drive was by far the worst part of it all, the road is so rocky and winding. I can still feel the all new level of travel sickness I reached. We were guided only by the light of our torches as it was pitch black and a young Balinese Sherpa who told us he can do this hike 4-5 times a day. Gaaadsss! 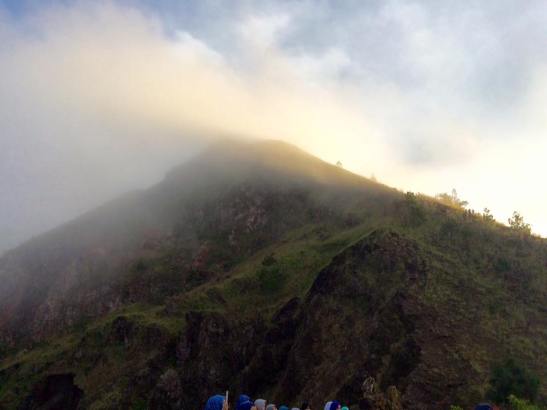 At this point last year, I really hadn’t done much hillwalking, so this was bloody hard – we were straight into a steep climb through some forestry… in complete darkness! I’m not exaggerating when I say our young Sherpa saved my life countless times on that mountain, every trip or almost fall, he appeared out of no where and pulled me upright haha! And put up with my constant ‘Are we there yets?’

After around 3 hours climbing in the darkness, we reached a break point which is just under the summit, we were told this was just as good a place to stop and watch the sunrise over breakfast, but I didn’t think I could live with myself if I didn’t go all the way, so we pushed on, me still moaning every step. We finally made it just in time to see the first rays of light appearing from the clouds – it took us roughly around 4 hours. Breakfast is cooked from the steam of the volcano by the Sherpas whilst all the tourists fight for the perfect picture site.

The climb down was a lot more picturesque and waaay harder than the climb up – that poor Sherpa. He held my hand the whole way down again and took us through the craters around the volcano, I even met some more monkey friends.

Part of the Mount Batur expedition included lunch at a local Chinese buffet and then a trip to a hot springs spa called Toya Devasya ‘Natural Hot Springs’… the ultimate treat after that trek! I thought the spa at Pan Pacific was incredible but this one was on a whole different level and OMG the view!

This was by far my favourite holiday ever and climbing Mount Batur is something I’ll never forget. I would highly recommend this to everyone.