Soooo I was super productive last Sunday and managed to fit in a quick hill walk before my mum was up looking for her Mother’s Day presents.

I also realised this would have been a good walk for any active mums before going for a nice Mother’s Day lunch but as usual I was so disorganised haha. Anyway, it’s a really easy, picturesque walk if you ever want a nice hike but nothing too strenuous – perfect for a Sunday!

It’s the Arrochar trail between Arrochar and Inveruglas. I didn’t actually make it the whole way as I was conscious of time and wanted to be back for my mum getting up so only went around half way. The walk usually takes around 4 hours there, and back. Head up towards Tarbert Railway Station where you can leave the car and head under the bridge adjacent to you.

After climbing up through some forestry, you’ll see this sign, turn left. You can see the walk that will take you to the right here.

Once you emerge from the forest, you will reach a cross roads – continue straight up past the yellow things into more forestry… 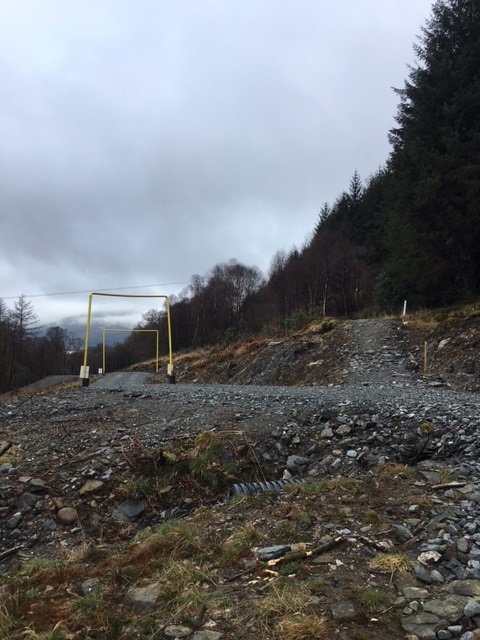 Although you are climbing up and down a few hills throughout the forest, there isn’t anything particularly difficult about this walk. And Spring was well and truly in bloom, there was so many tadpoles and frogs eggs along the rivers beside the path.

Eventually, you will emerge from the forest and begin to see some gorgeous views over Loch Long and Arrochar. Most of the hills were covered by the morning fog though.

These views continue as you go further along the path where you will then reach the sign below, you can continue further which will take you across to Inveruglas or you can turn left and head down into Arrochar village. 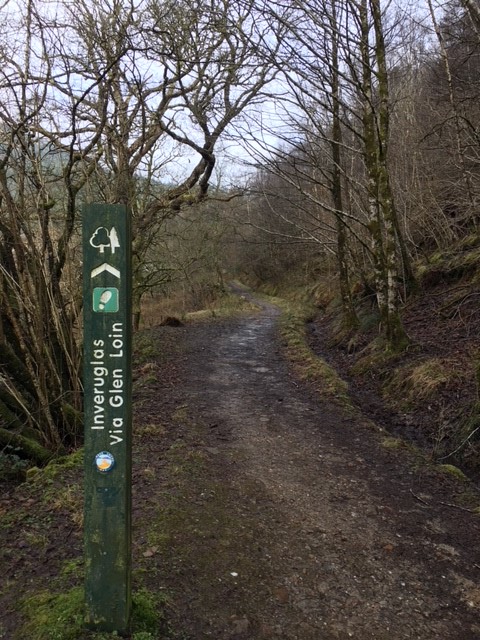 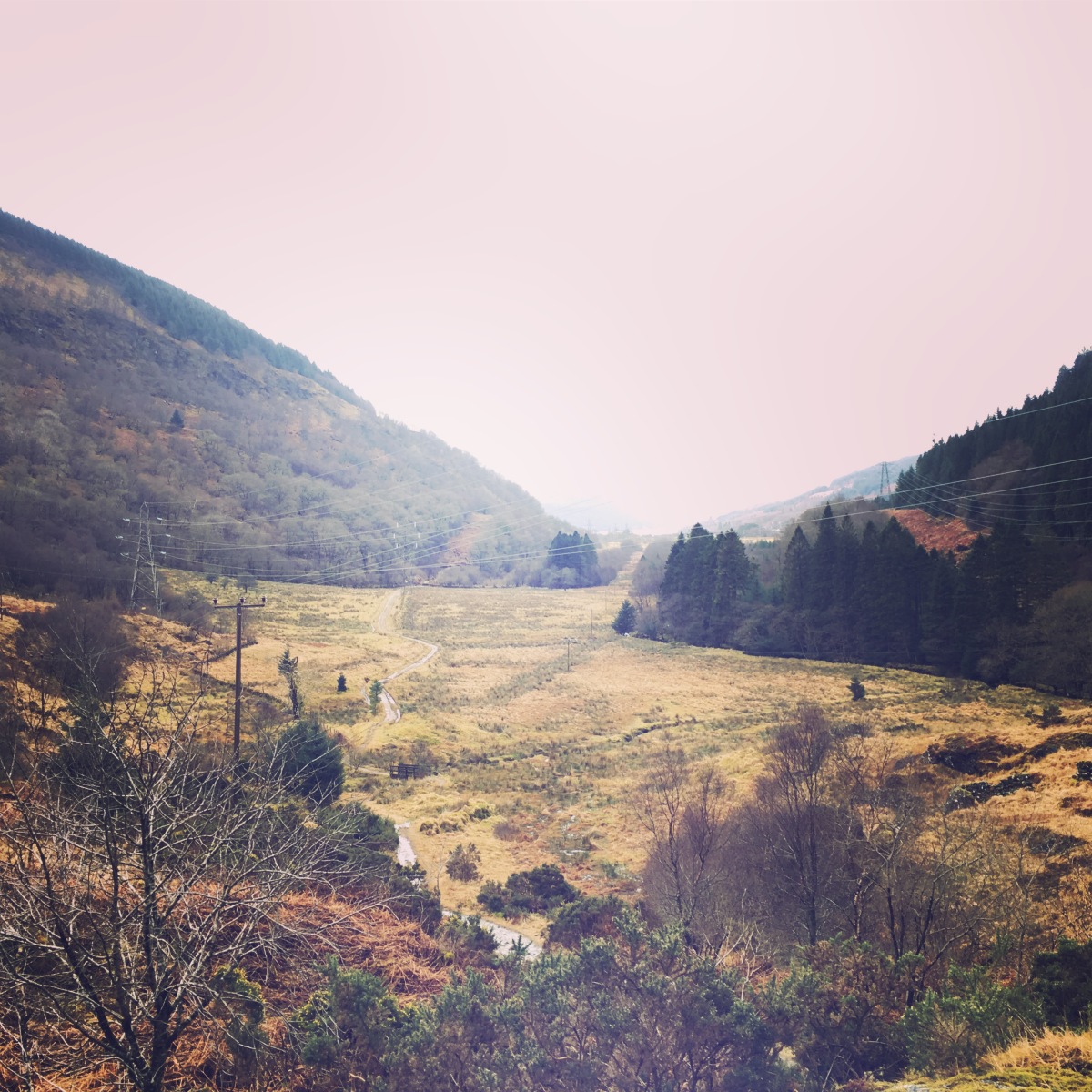 I am keen to do the entire trail one day, however, a couple of my friends that have done it, recommended starting at Inveruglas as there’s more places to grab a bite to eat in Arrochar before heading back, another option if you have the luxury of 2 cars was to leave one at either end. It’s also an ideal cycle route for all ages.

It’s not often I get to say this, but the weather was amazing in Scotland over the weekend. It was still FREEEZING (obvs) but the sun was out, and everyone was absolutely buzzin’.

And what better way to enjoy the weather than with a hill walk and a trip to the pub?!

After spending the morning walking from Inveruglas to Arrochar, we stopped in at Ben Arthur’s Bothy.

This little gem of a pub offers the most beautiful views over Loch Long and onto The Cobbler. With a 4 star rating on Trip Advisor and raving reviews from the locals – I was keen to see what they had in store.

From the outside, it doesn’t look like much but as soon as you step inside, you are hit with some spectacular views. They also have the option to sit outside and enjoy a pint or bite to eat. I was told they sell the best soup but was disappointed to discover it was pea and ham – my friends got stuck in though and it did smell AMAZING! It’s your typical pub grub menu, they did have a few vegetarian options but not loads, so I opted for the vege burger. Which I have to say, is one of the best vege burgers I have ever had! The portions were massive as well, just what you’re looking for after a long walk.

I would highly recommend Ben Arthur’s Bothy to anyone passing through Arrochar. The staff are so welcoming and friendly, the prices were more than reasonable, and the food is insane! They also cater to private functions, have live entertainment on throughout March to September and have a pool table and plenty of TV’s for anyone wanting to watch the football. 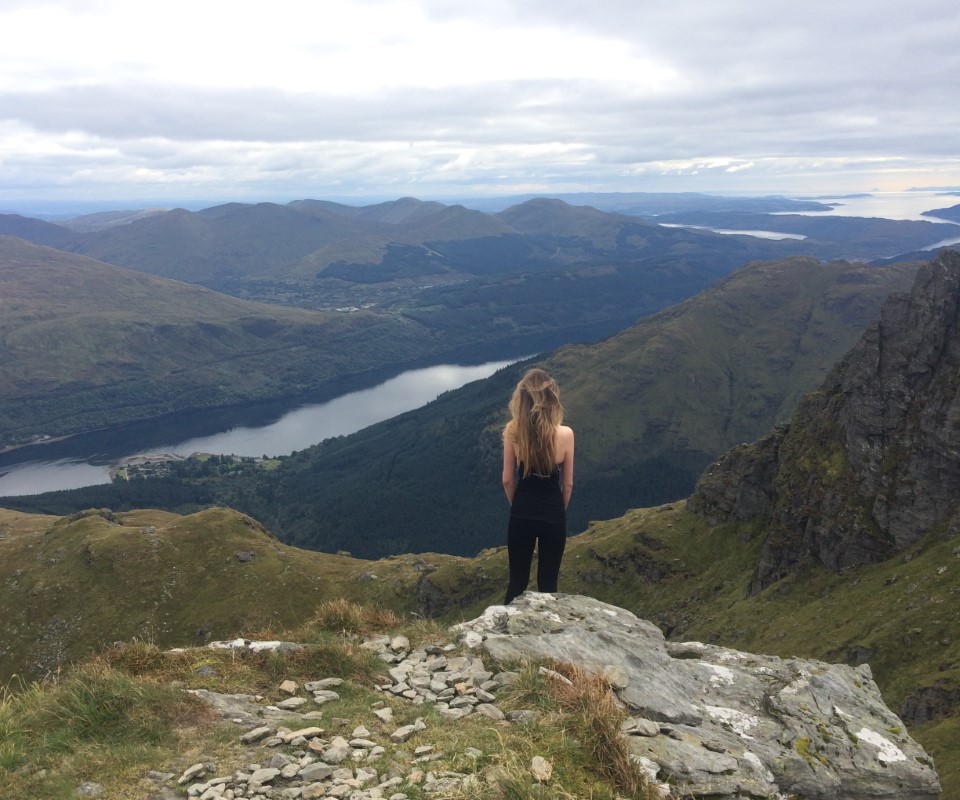 The Cobbler (also known as Ben Arthur) is found in Arrochar, just passed Tarbet, about an hour’s drive from Glasgow, with CityLink buses available also. It is famous for its unique outline and stunning views over Loch Long with a clear path all the way up which zig zags making the climb a bit more pleasant. The path explores both peaks of the mountain with two alternative ways to climb up and descend.

Me and my friend, Laura set off around 10 O’clock as we were told it takes around 4-6 hours, so with our backpacks loaded and hangovers in full swing we set off. The drive up passed Helensburgh and Luss is so scenic with plenty of cute places to stop for lunch or have a coffee. I’d recommend the Coach House Coffee Shop in Luss – they sell the most AMAZING cakes!

There are 2 car parks at the foot of the mountain (£1 parking) just to the west of Arrochar across from the start of the walk. The walk is vaguely way marked in red with there being 3 stages to climbing The Cobbler with the first being the most boring…

Once you begin, you are straight into a steep climb through a forest which eventually starts to zig- zag, making it a little easier, after around 20 minutes in, I started evaluating my life choices – it was hard and made with worse with a hangover, I never learn. Anyway, there are plenty of people to keep you right as it very popular but when you reach a bench, turn left on to a forestry track where you will then turn right and continue up. The views from this point are incredible, overlooking the loch and on a good day you can see the peaked summit of Ben Lomand. The first part took us around an hour and as you were just walking through a forest, it became very boring; we couldn’t see the foot or anything else for that matter except trees.

Once we emerged from the forest, we followed the path along a stream, passed a small dam and finally the three peaks were in sight!

This path was a lot more scenic but long. The path continues to climb more gently, crossing a number of side streams with large stepping stones where we eventually came to a cluster of boulders known as ‘The Narnain Boulders’, which had been previously and still today used as shelters by groups of climbers who did not have the resources for accommodation but also a good place to stop for food. By this point we had been walking for around 2 and a half hours and with the daunting climb ahead thought we’d stop for lunch.

After a quick bite to eat, we continued up the path where a fork is reached, keep right and continue up the valley (the lower route to the left is the return route). Be prepared for some actual rock climbing here, this was the fun part for us! We did however lose our balance on a few occasions so be careful. The path is less well made towards the top but still straightforward enough to follow.

Once you reach the top, you are between the North and Central peaks, on the right is the higher, central peak with panoramic views and the chance to climb out onto the rock pinnacle which marks the height of the summit – No thaaanks! …it gave me the fear so we nervously watched others risk their lives for their Instagram worthy photo.

The lower south peak is slightly harder and again a bit of rock climbing is involved (I thought the views were better here). The easiest route to the summit is to keep left when the path forks and go around the northern side but both routes are straightforward. This summit is equally dramatic, with a large overhang, and a view back to the central peak (I was brave enough for this one).

All in all, it took us just under 6 hours, the descent was much easier than I had anticipated. The photos don’t do the views enough justice but it is well worth doing. As it is a very popular climb there are plenty of people to chat to or for dog lovers like me, plenty of puppers to keep you entertained on the boring bits.